Save energy in cold storage.

A full cooler is a more efficient cooler, and we can help eliminate every cubic foot of wasted space in your cold storage facility. By compactly storing frozen items on the ActivRAC® Mobilized Storage System, you can:

The ActivRAC system not only saves on energy costs — it can also save on construction or rental costs. Web Industries found that by using an ActivRAC system they could store the same amount of material in a freezer half the size; read the case study here.

Constructing or renting new cold storage spaces isn’t your only option. A cost-effective alternative is rethinking your cold storage shelving and maximizing that pricey square footage in a whole new way.

Our systems feature carriage and rail systems where the shelving or racking moves side to side and eliminates static aisles—and that means you’re able to use every available inch of your premium freezer and cooler space to store products and goods without having to build or lease a new warehouse.

100% accessibility to products—along with a compacted space—eliminates long travel times and unnecessary touches. 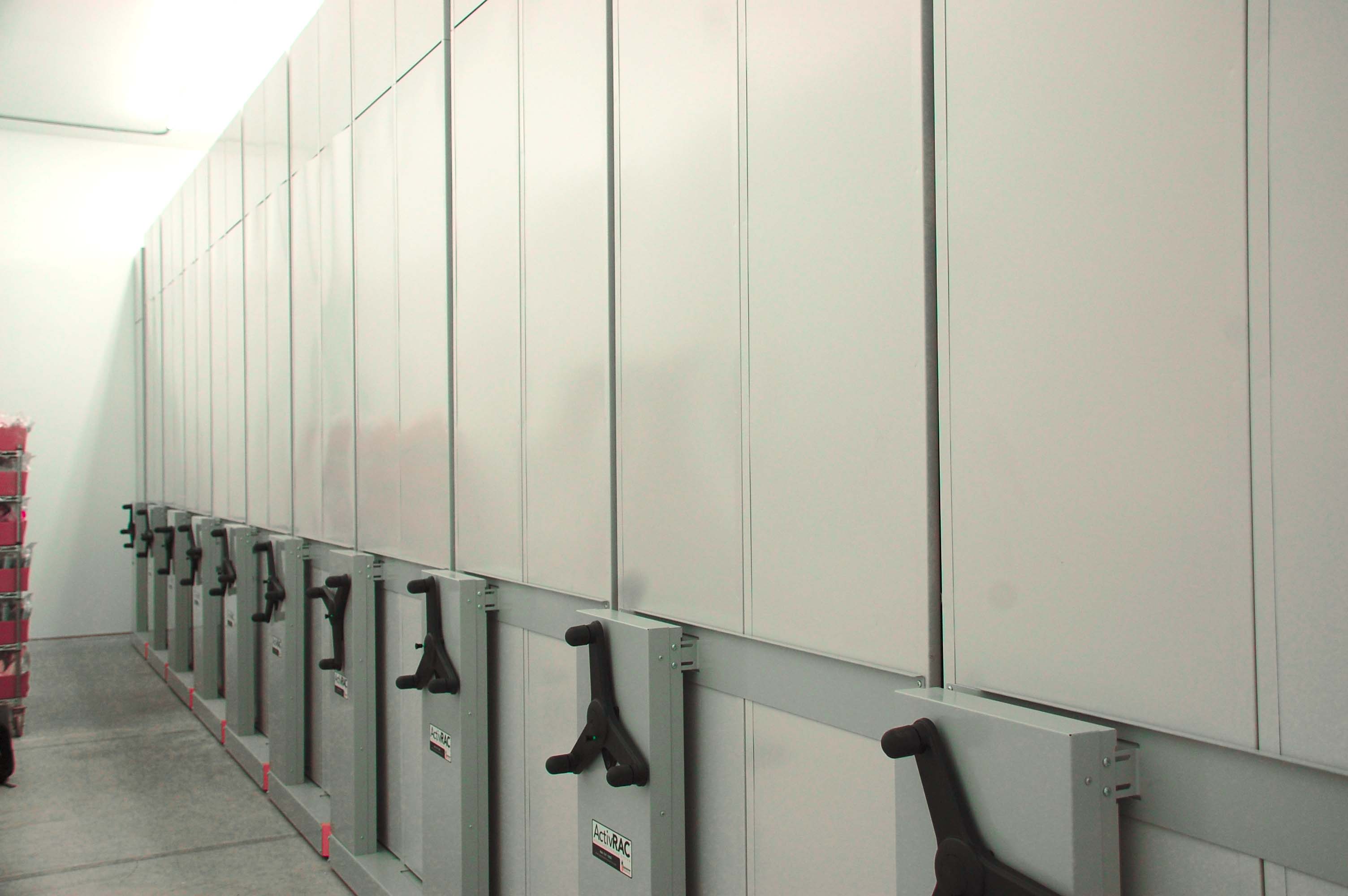 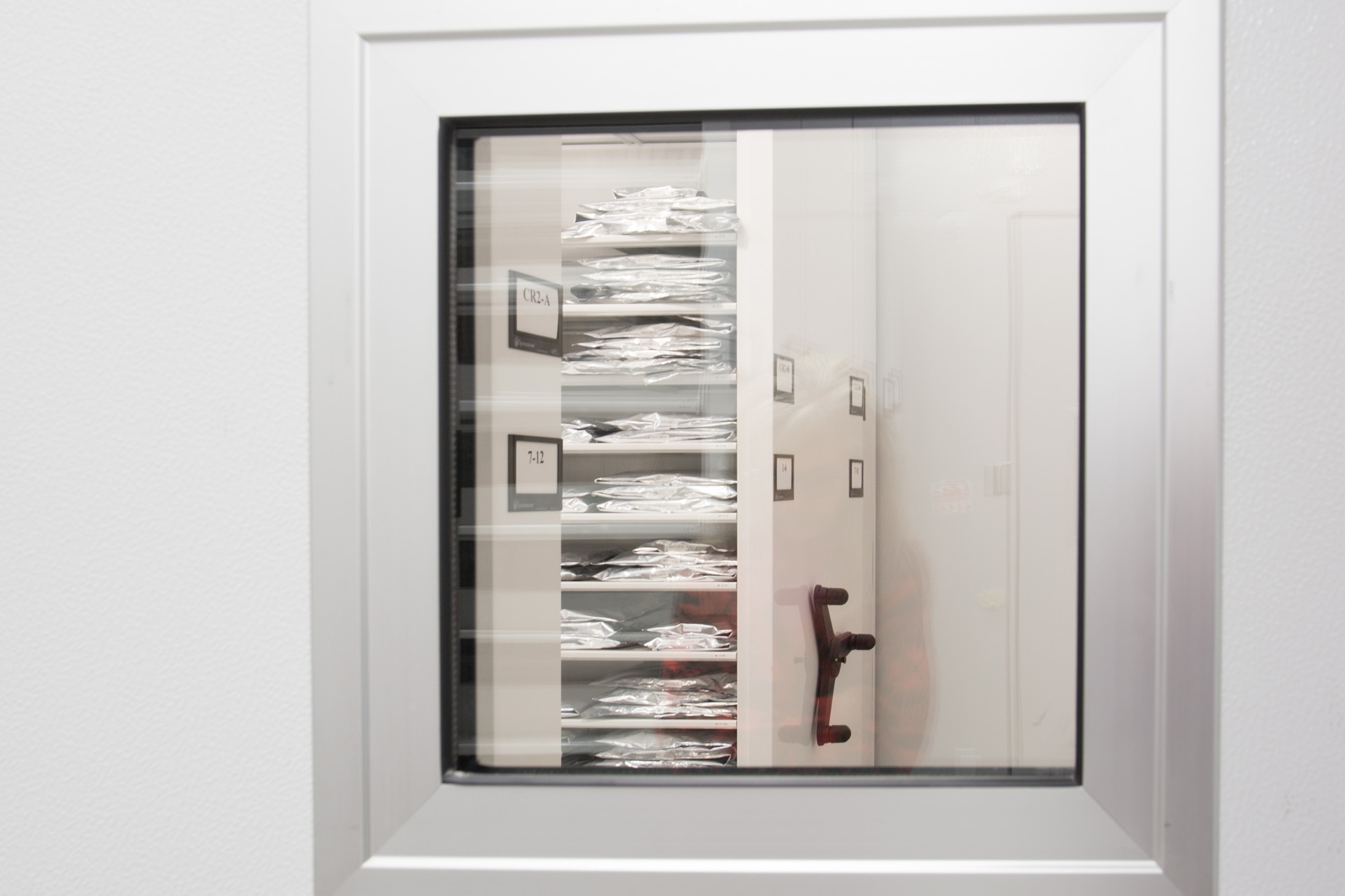 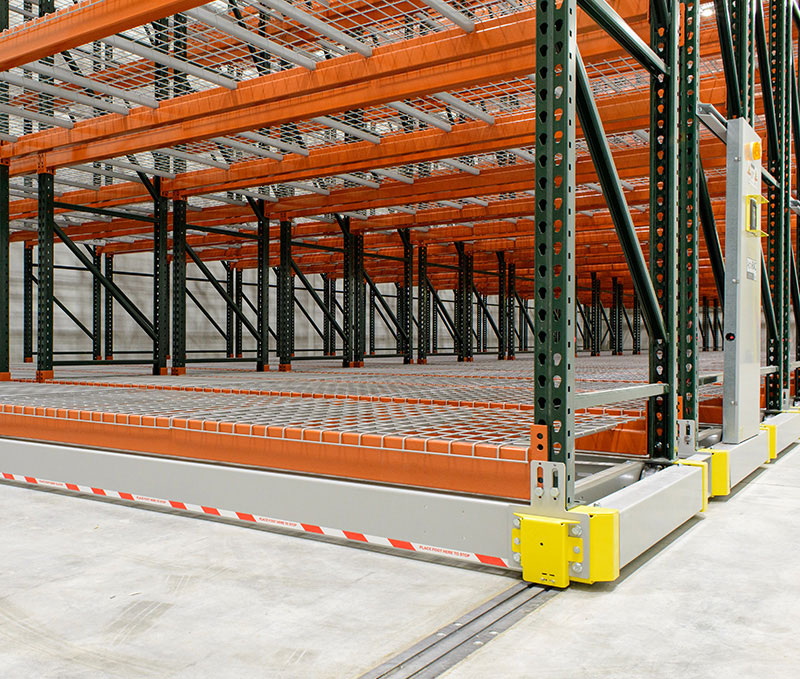 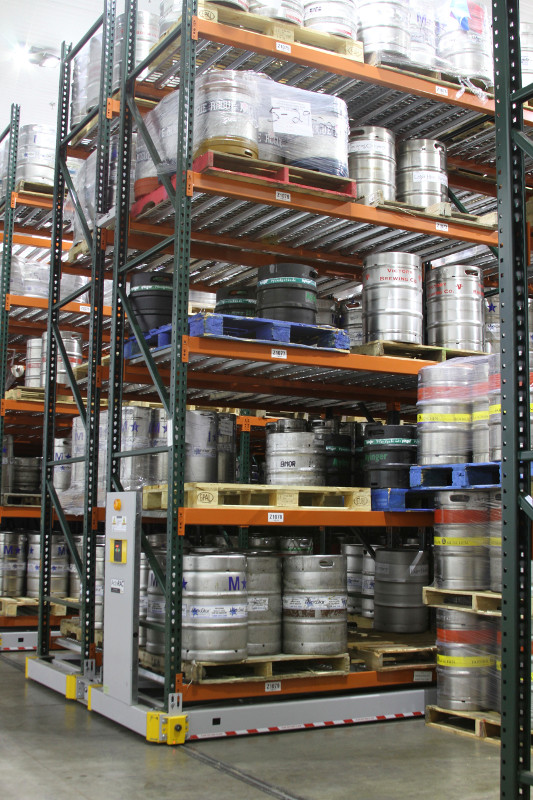 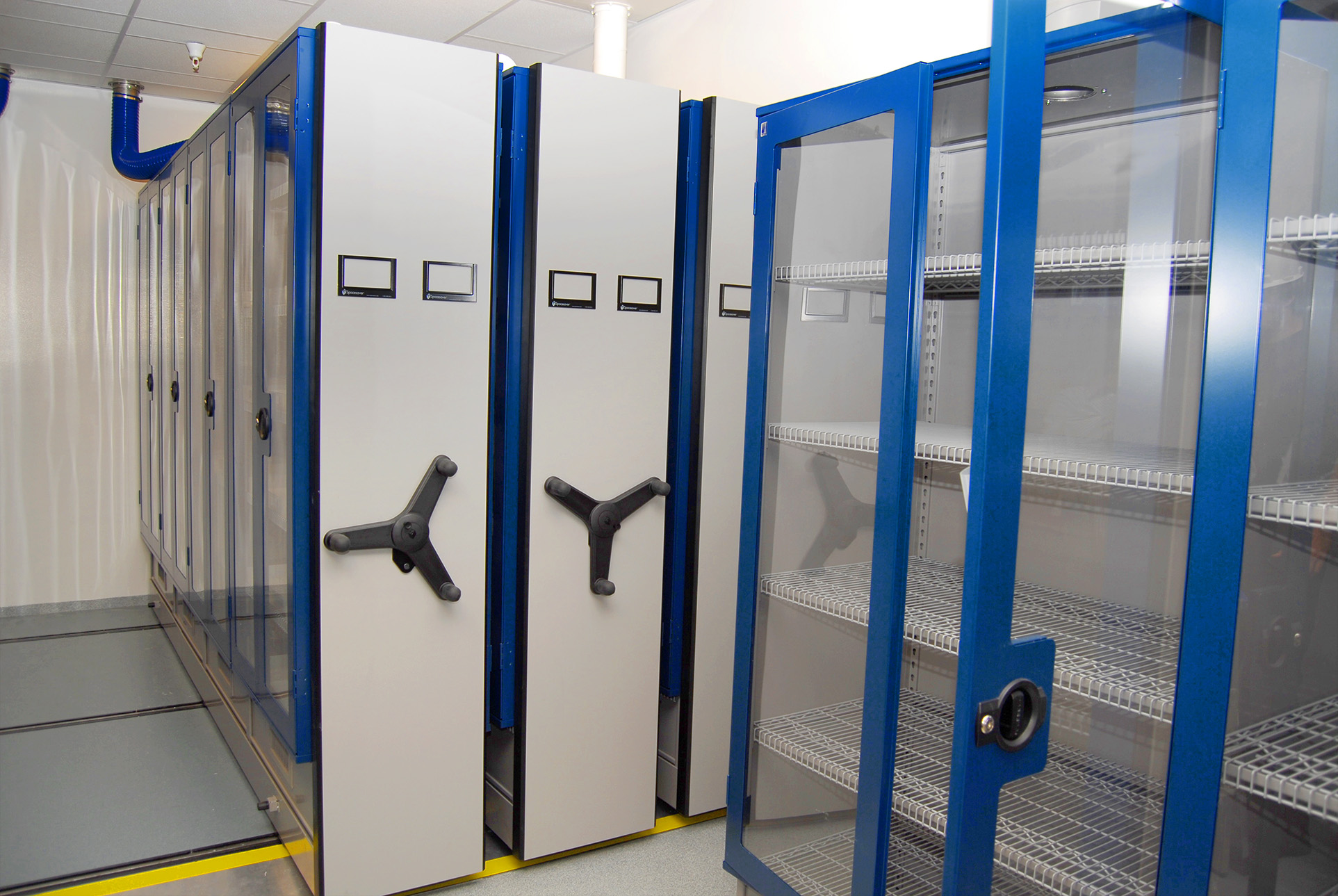 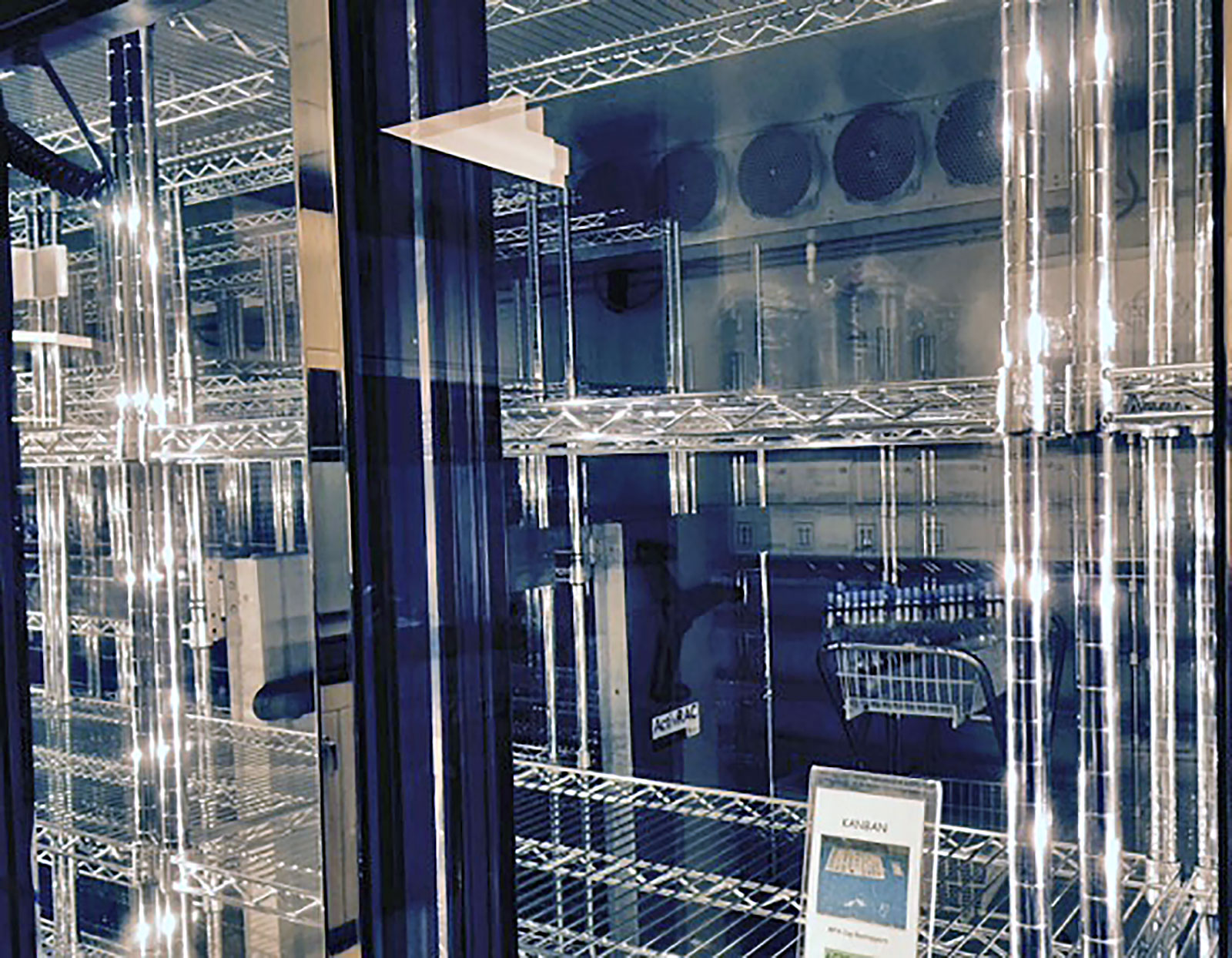 Composite materials allow aerospace manufacturers to build aircraft that are lighter, stronger, and more fuel efficient than their counterparts made of metal. That’s because composites consist of strong carbon fibers embedded in resin-like material, making them more resistant to corrosion and fatigue-related failure. But processing composites is a tricky process: heat causes the unfinished material to degrade, so the material must be kept at extremely cold temperatures until it is formed and finished for assembly.

When the composite materials aren’t being processed, they must be stored at -10 degrees Fahrenheit to prevent premature curing and extend shelf life.

After formatting, the products are refrozen and stored until they can be shipped to the end user, where they are used to manufacture composite aircraft and engine parts.

“Craft beer is exploding.” This observation from an Operations Manager at a beer distribution company is great news for beer aficionados and beer distributors – but it’s not without its complications. Despite minimal growth in the mainstream beer market, the craft beer segment grew 17% in 2014. Although craft beer still only accounts for only 6.5% of the beer U.S. beer market, craft breweries account for 98% of the breweries.

For beer distributors, the proliferation of unique microbrews means more market opportunities, but also means more products, space, and capital needed to accommodate them. Unfortunately, the distributor had a fixed amount of temperature-controlled storage space, and it became increasingly difficult to handle the influx of new product at the warehouse.

With overcrowded coolers, retrieving kegs became a frustrating ordeal. The 1500 square foot storage cooler was lined with racks of static shelving. Kegs were stacked one on top of the other on the shelves and on pallets in the center of the floor. Employees had to unload the cooler each morning just to get into the cooler and access to the kegs for distribution that day. The accessibility issue slowed operations and created an inefficient process that could slow deliveries. Unstacking and restocking the 165 pound kegs was not only inefficient, but also posed a possibility for injury. The distributor considered adding additional warehouse space, but doing so was capital-intensive and would require additional employees.

The increasing customer demand for a variety of craft beers, ciders, and other beverages can be a serious concern, especially when space is at a premium in your warehouse. Luckily, there’s an alternative to expanding or renovating your warehouse – mobile keg racks.

Here at Spacesaver, we’ve done some research on how you can properly manage those slow-moving SKUs for much-needed space, while at the same time freeing up critical and accessible space for fast-moving items that make up the majority of your profits. 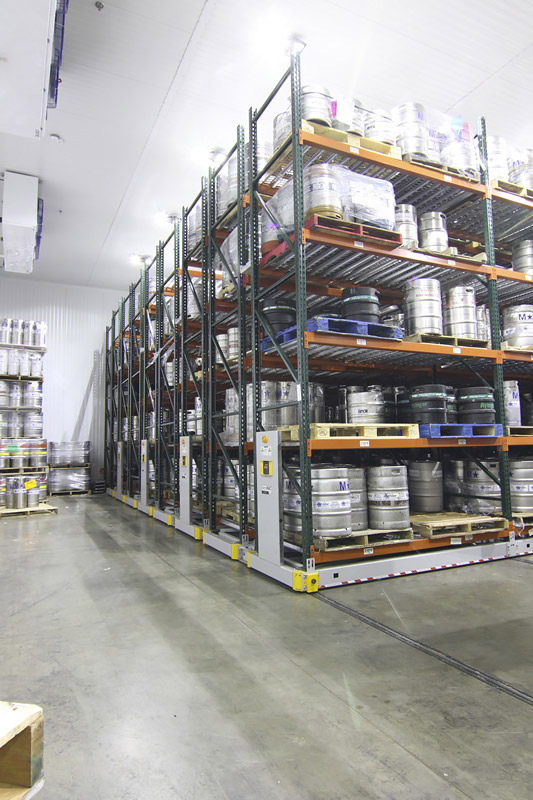 Mobile racking isn’t just for food and beverage—a global pharmaceutical company was in the midst of expansion, and unfortunately, an expansion of the company didn’t quite translate into an expansion of storage space. Due to very temperature-specific storage needs, chemicals and tests related to particular projects were being stored all over the lab, and the lack of organization was slowing down progress. An ActivRAC 7M-SS (Stainless Steel) heavy-duty cold storage shelving system, paired with an integrated HVAC system, gave them a way to centralize their compounds in one place—and continue to stay competitive in their market.

Do you need extra space in your Temperature-Controlled Storage area ?